Monkeys abound in our neighbourhood. They jump on the roof of our house, they eat guavas off our tree and, on occasion, they have come into the house and stolen our fruit from the fruit basket. They are such a nuisance. Some people have even resorted to poisoning the little creatures which I find disturbing and cruel.

A letter of complaint was published recently in our local newspaper saying that these animals should be “stopped”.  The rant was a repeat of the complaints by the locals and included suggestions for the eradication of the monkeys.

A couple of days later another letter was published, which gave me something to think about.  This letter contained a voice of reason which pointed out that the monkeys were in our neighbourhood first.  We came in and cleared the land, removing the banana trees and other sources of their food. We built our houses and simply expected the monkeys to go away. Well they have nowhere else to go now we’re stuck with them.

So we allow them to eat fruit off our trees but we make sure they don’t get into our house where they can cause havoc.

We all have to make sacrifices for the sake of harmony and if that means allowing the monkeys some leeway while taking care to restrict the damage they can do, it’s ok by me. 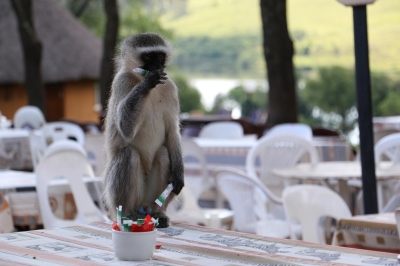 Max & Macy #gsp #staffy
Lockdown - day 54 #lockdown #kzn
Mother’s Day orchids, so beautiful they make my eyes water 😢 miss my girls ... ❤️ @nadiebabes @jandatrent @emmalydiaheine @jenn.heckroodt
Thank you Gray, Janey and Grace for my beautiful Mothers Day flowers, delivered today by a masked man who thoroughly sanitized his hands and the vase before handing them over. 😄 Blown away by your thoughtfulness and your kind words💐😘
Birthday Girl ❤️
#Lockdown - day 35