We had planned to ride on the Yellow Tram during our visit to Lisbon last month but, when we arrived at the tram stop, we were told that the tram would not be running – it was the Feast of Corpus Christi on that day. I must admit that I knew nothing about the celebration.

As we turned to walk up the hill we saw what seemed to be a parade and we stepped back onto the pavement to watch. My husband took lots of photographs and the disappointment of not riding on the tram faded as we were treated to a colourful and moving display. Loud speakers were installed all along the route and the air was filled with religious music.  First came the horses and their riders, then the clergy, nuns, monks, boy scouts, girl guides, police, traffic officers and so followed by hundreds of people who also formed part of the procession.

When I got back to our hotel, I looked on the Internet for more information and I found that Corpus Christi commemorates the Last Supper and it’s direct translation is Body of Christ. In Portugal the celebration is known as Dia de Corpo de Deus. Corpus Christi is mainly celebrated by Roman Catholics although Anglicans are also know to mark the day.

I found this information on Wikipedia in my search under “Corpus Christi”:

“At the end of Holy Mass, there is often a procession of the Blessed Sacrament, generally displayed in a monstrance.

The Feast of Corpus Christi is celebrated on the Thursday after Trinity Sunday – the date of the celebration is different each year as the day depends on the date of Easter Sunday. In 2016, Corpus Christi was celebrated on the  26th May and in 2017, it will be held on the 15th June. It is always held on a Thursday. It is also known as Corpus Domini, which means “Body and Blood of Jesus”.  Although the celebration can differ in various places, it is usual for bread and wine to be consumed. The bread signifies the body of Christ and the wine signifies the blood of Christ.

Christians commemorate the suffering, death and resurrection of Jesus by taking communion as Jesus did the when he shared the Last Supper with His Disciples.

24 and when He had given thanks, He broke it and said, “This is my body, which is for you; do this in remembrance of Me.”

25 In the same way, after supper He took the cup, saying,

“This cup is the new covenant in My blood; do this, whenever you drink it, in remembrance of Me.”

In retrospect, I’m delighted that the Yellow Tram wasn’t running on the 26th May 2016 and we were able to watch the celebration of Corpus Christi instead.

“Our happiest moments as tourists always seem to come

when we stumble upon one thing

while in pursuit of something else.”

The horses led the procession. 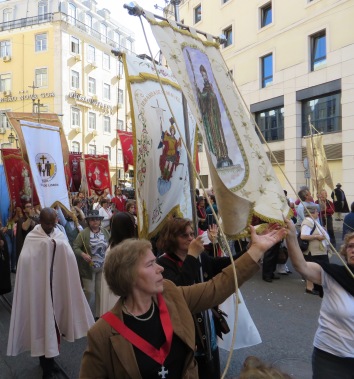 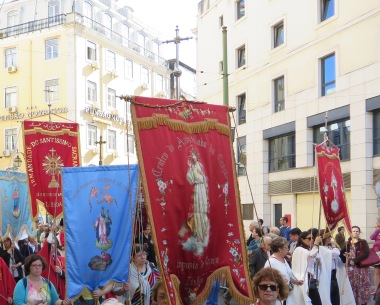 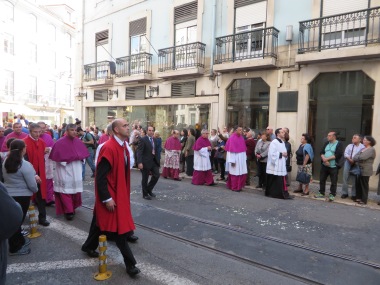 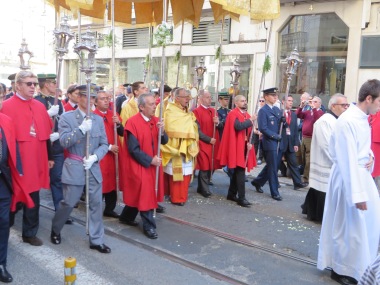