Polesden Lacey is situated in Surrey, England. Mrs Margaret Grenville bequeathed the property to the National Trust in 1942 in memory of her father whom she adored.

She was the illegitimate daughter of William McEwan, a very wealthy Scottish brewer. Mrs Grenville rose to be highly influential in English society and entertained royalty, prime ministers, ambassadors and business people. She could boast the friendship of King Edward VII.

The Estate has remained mostly intact since the Middle Ages. When Mrs Grenville bought the property in 1906, she and her husband, Hon.Mr Ronald Grenville, employed the same firm of architects who designed the Ritz Hotel to attend to the upgrades and changes which they wanted. As Mrs Greville was a very wealthy woman, money was no object.

A section of the upstairs portion of the house has been occupied by the National Trust. However, they have relocated and the rooms are going to be restored to their former glory. These were mostly used as guest bedrooms by Mrs Grenville as well as staff quarters.

Weekend parties took place in the Saloon and on the afternoon when we visited, a pianist played the piano which added to the atmosphere in the lovely old house. 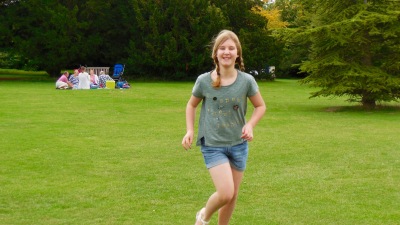 My granddaughter, enjoying the summer sunshine at Polesden Lacey

The grounds are beautifully cared for by the National Trust and the gardens are amazing. There is a Rose Garden, a Lavender and Iris Garden as well as a Winter Garden and a Summer Garden.

When I visited the house, this Afternoon Tea Dress was on display. It was recreated by a group of volunteers who used a photograph of Mrs Greville wearing the dress.  34 volunteers spent 2000 hours over a period of 2 years on the project.

I hope to go back to Polesden Lacey as it definitely deserves more than one visit. There is so much to explore. Apart from its historical interest, guests can picnic on the lawns, go for walks and wander around the manicured gardens and absorb the atmosphere of this beautifully maintained Estate.